A kind reader sent in these two photos showing Norman Cardinal Gilroy's choir dress, which was on display in St Mary's Cathedral, Sydney about 6 years ago. The galero is there, too! 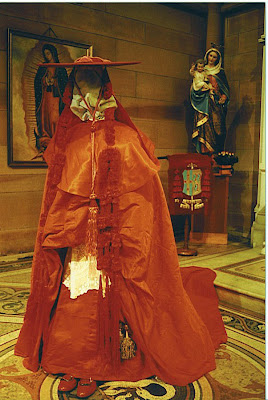 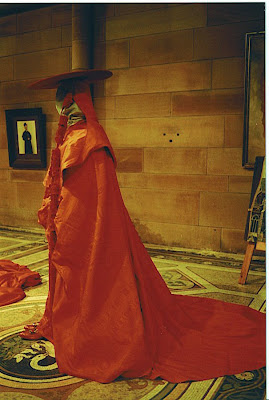 Norman Thomas Cardinal Gilroy (1896-1977) was ordained a priest in 1923 and was appointed bishop of Port Augusta, Australia in 1934. He became Coadjutor Archbishop of Sydney and Titular Archbishop of Cypsela in 1937. On the death of Archbishop Michael Kelly, Gilroy succeeded to the Archdiocese of Sydney on on 18 March 1940. Gilroy was created Cardinal on 18 February 1946, becoming the first Australian-born member of the College of Cardinals, with the titular church of the Santi Quattro Coronati.

[Thanks to Fr. Richardson for sending in the photos]
Posted by leo at 9:45 AM

That exhibition must have been staged by an even bigger girl thqan Donna Richardson!