A nice photo of Cardinal Villeneuve 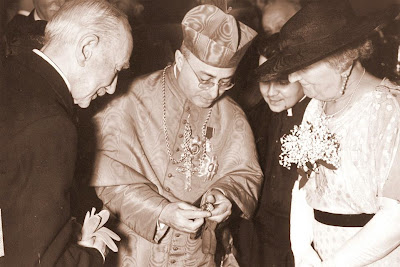 Jean-Marie-Rodrigue Cardinal Villeneuve, OMI (1883 - 1947) served as Archbishop of Quebec from 1931 until his death, and was elevated to the cardinalate in 1933. This is an interesting photo I got via eMail. Thanks to sender-inner Charles, who describes the pic for us:

The picture was taken during the Eucharistic Congress in Quebec City in June 1938. The Cardinal is Rodrigue Villeneuve. He was no doubt a Prince Palatine since he wore the watered silk simar. He was decorated with numerous orders which I have not been able to identify. He wears two saches under his mozetta.

Alright. Thanks again, Charles! And keep those photos coming! The more you guys send, the more "The Far Sight" will be able to show!
Posted by leo at 12:04 PM 3 comments: 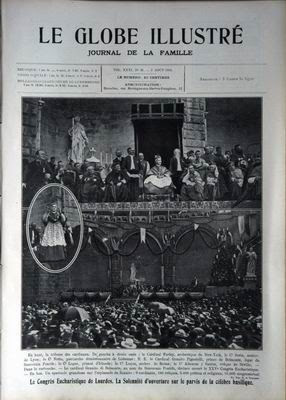 “Jesus Christ, past, in the historical truth of the evening in the Upper Room, to which every celebration of holy Mass leads us back.

Jesus Christ, present, because he said to us: ‘Take and eat of this, all of you, this is my body, this is my blood’. ‘This is', in the present, here and now, as in every here and now throughout human history. The real presence, the presence which surpasses our poor lips, our poor hearts, our poor thoughts. The presence offered for us to gaze upon as we do here, this evening, close to the grotto where Mary revealed herself as the Immaculate Conception.

When we contemplate the sacred host, his glorious transfigured and risen Body, we contemplate what we shall contemplate in eternity, where we shall discover that the whole world has been carried by its Creator during every second of its history. Each time we consume him, but also each time we contemplate him, we proclaim him until he comes again, donec veniat. That is why we receive him with infinite respect.” 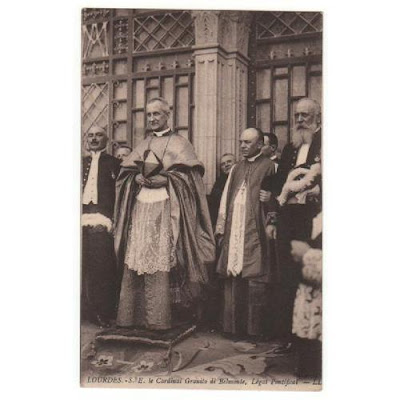 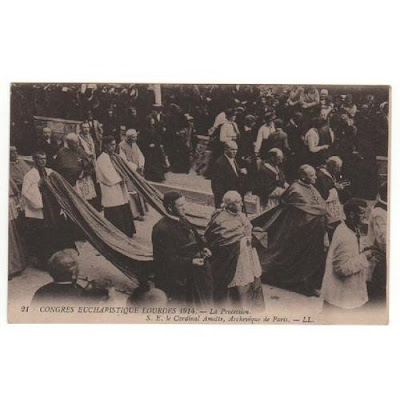 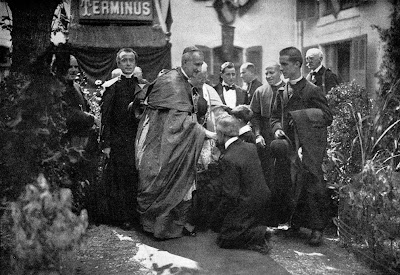 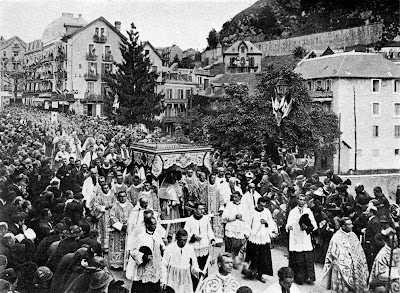 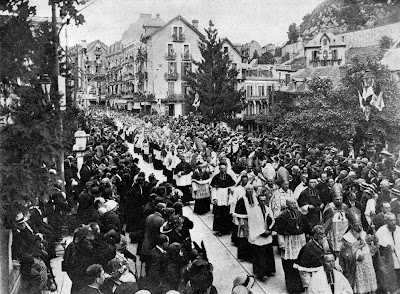 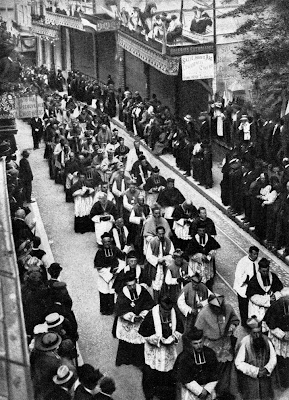 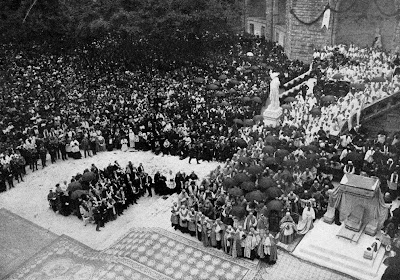 Some photos from Malta 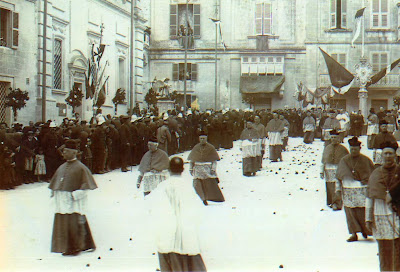 1913: Procession in Mdina on the occasion of the 24th International Eucharistic Congress held in Malta 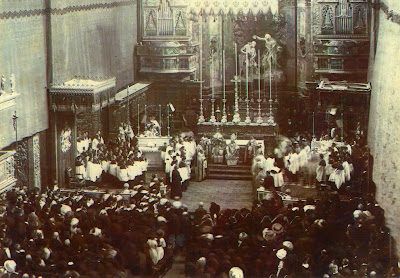 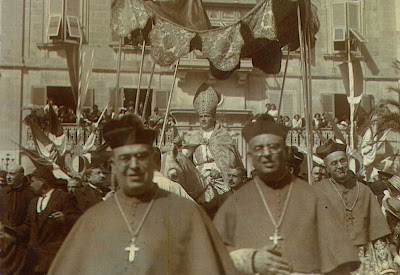 1915: The entry of Mauris Caruana, bishop of Malta, in Mdina 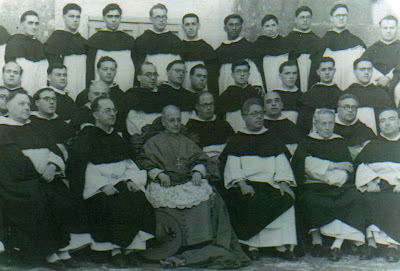 1944: Archbishop Michael Gonzi with the Dominican community of Rabat on the eve of his solemn entry as bishop of Malta 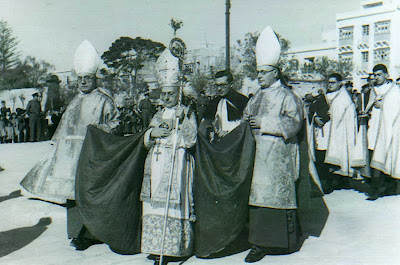 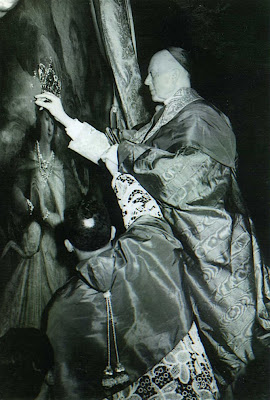 1955: Federico Cardinal Tedeschini crowning the painting of the Immaculate Conception of Cospicua with twelve stars.
Posted by leo at 2:05 AM No comments: 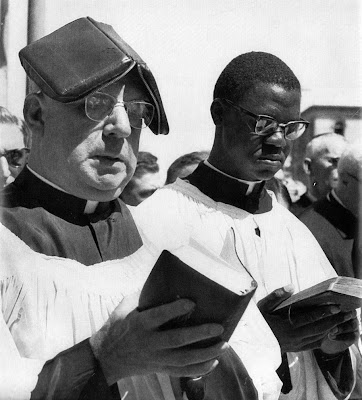 This photo was taken during the International Eucharistic Congress in Munich, 1960. It can get quite hot there in the summer, so people have to resort to all kinds of means to keep the sun from burning their heads and faces, as you can see.
Posted by leo at 12:31 AM 1 comment: 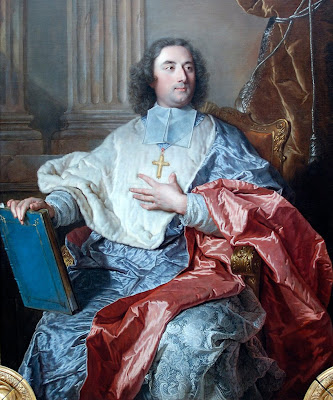 I love this painting. The ermine looks so fluffy and the silk seems so real that I can almost hear it rustle.
Posted by leo at 11:55 PM 5 comments: 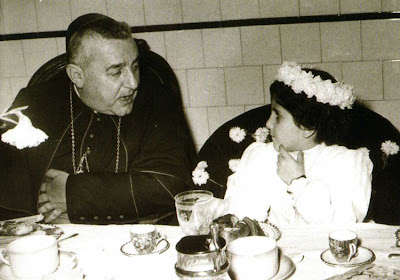 My buddy, Fernando Cardinal Quiroga-Palacios, hasn't been around for a while. Here's a nice photo showing him with a first-communion girl.
Posted by leo at 1:48 AM No comments: 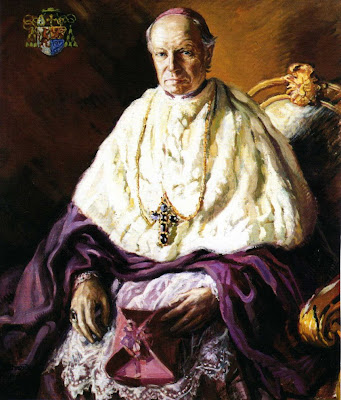 He was the bishop of the very beautiful German city of Passau from 1906 to 1936. He consecrated an average of one new parish a year during his term, raised the number of priests from 570 to 730 and founded the diocesan newspaper. 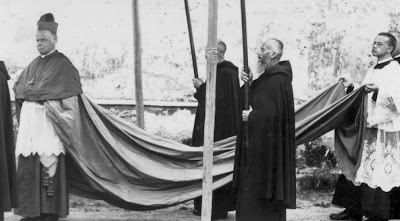 I once had the chance to visit an organ-concert in the cathedral of Passau, which is the largest organ in Europe and the largest cathedral organ in the world. I actually felt the first note that was played during the concert before I heard it. The pews in the cathedral began to vibrate and only two or three seconds afterwards did you hear a sound. Wicked.
Posted by leo at 1:31 AM No comments: 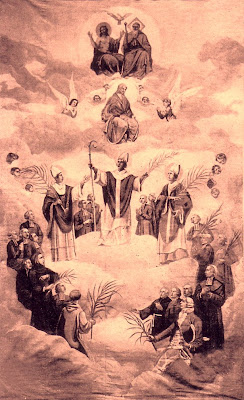 With the Protestants it was "Down with Rome!"

With the philosophers from the enlightenment it was "Down with Christ!"

With the atheists it was "Down with God!"

Today - after putting man in God's place - they are busy working on "Down with man!"


Here's a look back into the glorious achievements of those who want to give us liberty, equality and fraternity. Anybody ever wondered why "justice" never was part of the slogan?

"In 1792, the radical Jacobins determined to punish with death not only the aristocrats, but clergy who had refused the oath.

The “non-jurors” - those who had refused the oath - were arrested en masse in August, 1792, and herded into several Parisian monasteries out of which the resident monks had been driven. These prisoners were priests, bishops and religious from many dioceses. Then on September 2, a band of violent armed men, perhaps 150 in number, was sent by the “Committee of Vigilance” to one after the other of these temporary prisons. One detail arrived at the Abbey of St. Germain just when a number of prisoners got there, transferred from other places of detention. The executioners shot them down in cold blood. Then they went to the old Carmelite monastery, where another group of cutthroats joined them. They ordered all the prisoners to come out into the garden, even the oldest and most disabled. The clerics had already discussed once more the question of taking the oath, and all had agreed they could not and would not subscribe to it.

Now the gang fell upon the first priests they met and cut them down. Then they called out, “The Archbishop of Arles!” Archbishop John du Lau of Arles was praying in the chapel. When summoned, he came out and he said, “I am he whom you seek.” Thereupon, they cracked his skull, stabbed him and trampled him underfoot. Then the leader set up a “tribunal” before which the imprisoned were herded and ordered to take the oath. All refused; so, as they passed down the stairway, they were hacked to pieces by the murderers. The bishop of Beauvais had earlier been wounded in the leg. When summoned, he answered, “I do not refuse to die with the others, but I cannot walk. I beg you to have the kindness to carry me where you wish me to go.” For a moment, his courtesy silenced the assassins. But, when he, too, refused the oath, he was killed like the rest.

Later on the purge was carried out elsewhere in France. Some 200 clergymen fell that September, and they were only a small percentage of the 1500 clergy, laymen and laywomen who were massacred in 1792 alone.

Pope Pius XI beatified 191 of the priest martyrs, in 1926, assigning to them the title of “Blessed John du Lau and Companions, Martyrs.”

They had been the helpless victims of wild revolutionary ideology. As usual, however, their heroism in the defense of the papacy was remembered long after the names of their blood-thirsty executioners had been forgotten. They saved the reputation of France as “eldest daughter of the Church.”

The French Revolution was rich in atrocities, but what happened on September 2nd and 3rd in 1792 shows the scum from its most despicable side. Let us never forget, that every instance to push our Holy Catholic Religion from the public sphere has always been and will always be just the preparation for something bigger and bloodier. 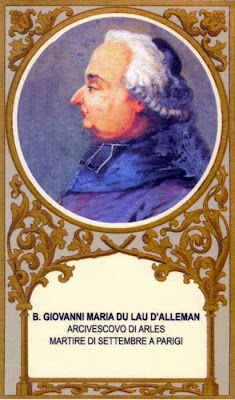 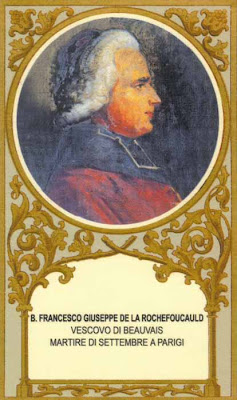 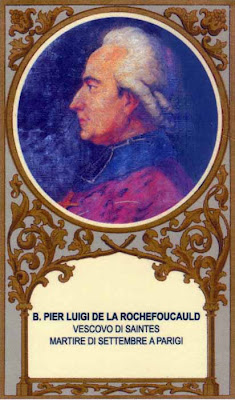